A large open plan office space with large windows, fronting a large storage and distribution centre, had sufficient LED lighting to ensure minimum illuminance levels at night, but, during the day when occupancy and natural light was at its highest, the lighting was operating unnecessarily.

The client wanted dynamic light output to vary depending on the amount of daylight penetration to the offices. They also wanted to allow for differing amounts of daylight ingress depending on the proximity to the windows.To optimise energy savings even further, they wanted to regulate HVAC to each space based solely on occupancy.

“Although we wanted really comprehensive control, we wanted it packaged in a really simple solution,” they said.

The ESYLUX PD-C360i/24 DUODIMplus detects occupancy and office light level. If the ambient light is below the desired level required, the LED lights will illuminate - but only to the required output to reach expectation, by regulating light output.

The output from each sensor links to two separately controlled lighting channels:

Each channel from the sensor has the abilty to dim to different outputs. During the day the lighting nearest the windows would operate at a lower output than those nearer the internal walls.

The third channel from this sensor links to a damper installed to the HVAC ducting. This switches the damper open only on occupancy and, with a longer shutoff time than the lighting channels, ensures the air change still occurrs long after occupancy has ceased. 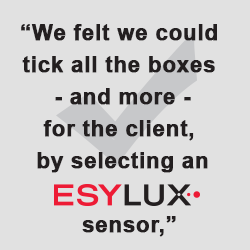 To allow for human interaction (or inaction) to improve energy saving potential, Simx also recommended using the sensor switching functions. This meant that even if natural light levels were insufficient, artificial lighting would not activate without pressing a wall switch – a normal action for people at home, so why not at work?

Often people are happy to work with less light, so turning lighting on only when they felt it was needed was a good contribution to further power savings from staff. The sensor still automatically turns off when they leave.

“We were more than impressed with the complexities this sensor could offer, and are delighted with the impact they made in getting energy demand down as low as it could possibly get.” 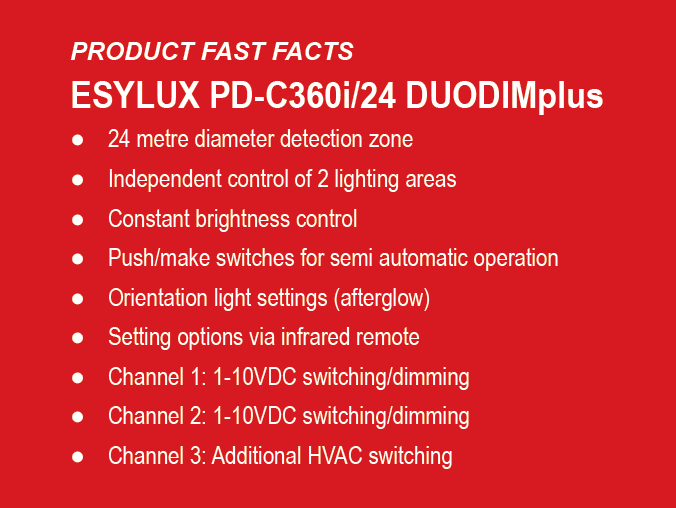 For more information on DUODIMplus from Simx click here or contact us at by email or phone 09 259 1660.